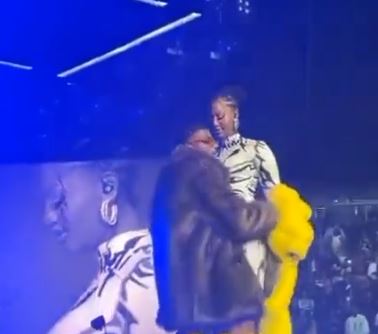 A video has surfaced on-line displaying the second Grammy winner, Wizkid tried to raise Tems on stage in London.

The hilarious clip was captured through the ongoing ‘Made In Lagos’ Live performance within the O2 Arena, London, whereas performing their monster hit titled ‘Essence’.

Throughout their performance, they moved nearer to one another and Wizkid did what no one anticipated.

He grabbed Tems by her bottom and tried lifting her up though and this made the crowd go wild.

She nevertheless, didn’t permit him to hold out his ‘weightlifting intention’ as she subtly brought down his fingers and disengaged from him.